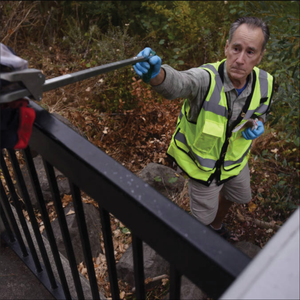 'Mr. Bob,' Park Side's wonderful custodian, was recently featured in The Press Democrat for his exceptional and on-going work to clean up a local creek trail! Read and watch the full story by clicking above. He always goes above and beyond to keep our classrooms and campus clean and running smoothly, and he does it in his personal time out in the world, too. We are honored to recognize Bob for his trailblazing work to keep our district and community clean, safe and beautiful.

KERRY BENEFIELD
THE PRESS DEMOCRAT
CLICK TO WATCH ACCOMPANYING VIDEO: “One man’s quest to rid the creek of debris”
Original story as is appeared in The Press Democrat on October 9, 2021
Last spring Robert Ashe had started riding his bike from his Santa Rosa home to his job as a school custodian in Sebastopol.
He picked a route that took him mostly off of city streets. He rode from the Prince Memorial Park near Santa Rosa City Hall, down onto the greenway and west where he’d connect to the Joe Rodota Trail.
Ashe, 63, took in the beauty of the creek, of the waterway, of the system of paths meant to take users a little bit out of the city and give them a dose of nature. But on his rides Ashe took in other things too: potato chip bags, beer cans, soiled sweatshirts, needles.
“I’m going, ‘Are you joking?’” he said of his initial reaction. “I had no idea it was so trashy in so many different ways. I was getting really upset.”
But instead of taking a different route or just grumbling, Ashe got off his bike, got a bag and gloves, and got to work.
“I thought, ‘You know, just settle down, and rather than throwing stones, get involved,’” he said.

Since May, Ashe has been on the greenway, a few hours each morning, six days a week.
He follows generally the same path each morning, covering the same ground he covered the day before, each day filling up bags and bags of trash. He worries if it’s not picked it up, it will eventually end up in the ocean.
“Ultimately my goal, my number one goal, is the environmental tragedy that is going on and trying to mitigate that as best I can,” he said.
Ashe sees it as both a looming tragedy but also a painful missed opportunity. The creek is an unused, or forgotten, or overlooked, or taken for granted gem, he said.
He sees the trash and neglect keeping people away from the waterway and system of paths created to augment it.
“This is one of the premier spots in the city,” he said. “My business head comes out and I look at this and think ‘Oh my god, the amount of traffic you could create, tourism, the utilization of this whole greenway area.’”
Every morning Ashe sees what the greenway is, but he can’t shake what he thinks it could become.
“I don’t see anything unreasonable with having high expectations,” he said. “It has the potential to drag in tourism, you go eat downtown, in the Railroad Square or Roseland then say, ‘Let’s go take a walk.’ It’s beautiful, it’s gorgeous.”
“For some reason or another, we have decided to just let this go,” he said.

Keeping the vigilant schedule he keeps, Ashe is bound to meet people. He strikes up conversations. But he doesn’t let much get in the way of his progress. He walks faster than your average bear despite toting a plastic bag that grows increasingly heavy as the morning wears on.
On this morning, working the north side of the trail down closer to the water than the main path, a man rides by on his bike, and calls out, “Thanks Robert!”
“Morning Kevin!” Ashe calls out over his shoulder.
Kevin rides with his daughter on the greenway, dropping her off at day care, Ashe said. He stopped to talk to Ashe recently and Ashe told him of his work. Now they exchange greetings.
He bids good morning to passersby.
When he comes to an area where tents are erected or where people experiencing homelessness are sleeping, he picks up things around the outer edges of the area but doesn’t venture too close.
While he is quick to pick up wood and planks he finds (the resultant ash from fires blows into the waterway, he said) he doesn’t touch the cardboard he finds. He knows people don’t burn it, they sleep on it.
“I respect the fact that they are sleeping on concrete,” he said.
“There are some really great people down there, they are just sweet souls,” he said. “Unfortunately, they have made some bad decisions.”
On this day, he found one used needle. The day prior it was two. The city has issued him a container to collect them and keep him safe. In his car, he has a container filled with 16 spent needles.
Sometimes he talks with folks who sleep on the pathways he cleans. Sometimes he has real exchanges; other times he doesn’t have time or people aren’t in the mood.
When we meet early Tuesday, he moves our conversation down the path and away from a man I had not noticed was sleeping nearby.
He is both respectful and occasionally frustrated. But he’s ever hopeful.
“Some of them have started picking up their trash,” he said. “I am noticing that. Or maybe I want to think that.”
He said he saw a woman tie a bundle of trash in a plastic bag and walk it to one of the bins on the path. It was a simple gesture that has a huge impact, he said.
Another woman asked him for one of his city-issued bags so she could collect her trash.
“It’s my hope, that if you can lead by example,” he said, letting the end of thought trail off. “I don’t think anybody doesn’t want to do the right thing.”

Ashe goes about his business alone. He has made contact with the city and he says his efforts are supported. He appreciates what they have done to help his quest.
He’s been issued a neon green mesh vest. He’s been given boxes of gloves and bags. He has a city-owned ring that he fits to the top of the bags to help them stay open. He was lent a metal pickup gadget.
He brings his own broom.
“Oh yeah, it’s in my car,” he said. “I come prepared.”
And Ashe adores the groups he goes out with through the city’s creek stewardship program. He feels revitalized working with the volunteers whom he describes as enthusiastic, like minds.
But it also puts a spotlight on the severity of the problem.
“That is once a month,” he said of city-sponsored creek cleanup days. “I’m picking up two to three bags a day, six days a week.”
“This is a situation,” he said. “They need me. They need other people to do what I’m doing.”

‘I’m not getting discouraged’

Ashe is a modern day Sisyphus. He picks up bag after bag of trash, takes it away from the path, leaving cleanliness in his wake.
In the morning, the trash is back. The bags must be refilled. Another day of pushing the boulder up the mountain.
“I’m a custodian, so I’m constantly having to redo what I did the other day,” he said. “I’m used to that.”
I asked Ashe how he remains positive. Because he does. He smiles when he speaks.
“I have just so much enjoyed being down there. I’m not getting discouraged by this,” he said. “There are a lot of positives. All of the people I’m meeting, let’s call them homeless. And I meet regular people like yourself that use the greenway. I just met a gentleman on his bike, taking his daughter to day care.”
Remember Kevin? The one who called out appreciation to Ashe earlier? Those moments buoy him.
He praises the team from the city who work on creek stewardship. He praises the volunteers who spend a Saturday morning a month getting dirty for others’ benefit.
He knows it must look strange to some, this mission he’s on. He doesn’t mind. But he also wouldn’t mind company.
“I think they are scratching their head, saying ‘What is this guy doing?’” he said. “But I have the will. I feel like if I had some company …”
You can reach Staff Columnist Kerry Benefield at 707-526-8671 or kerry.benefield@pressdemocrat.com. On Twitter @benefield.